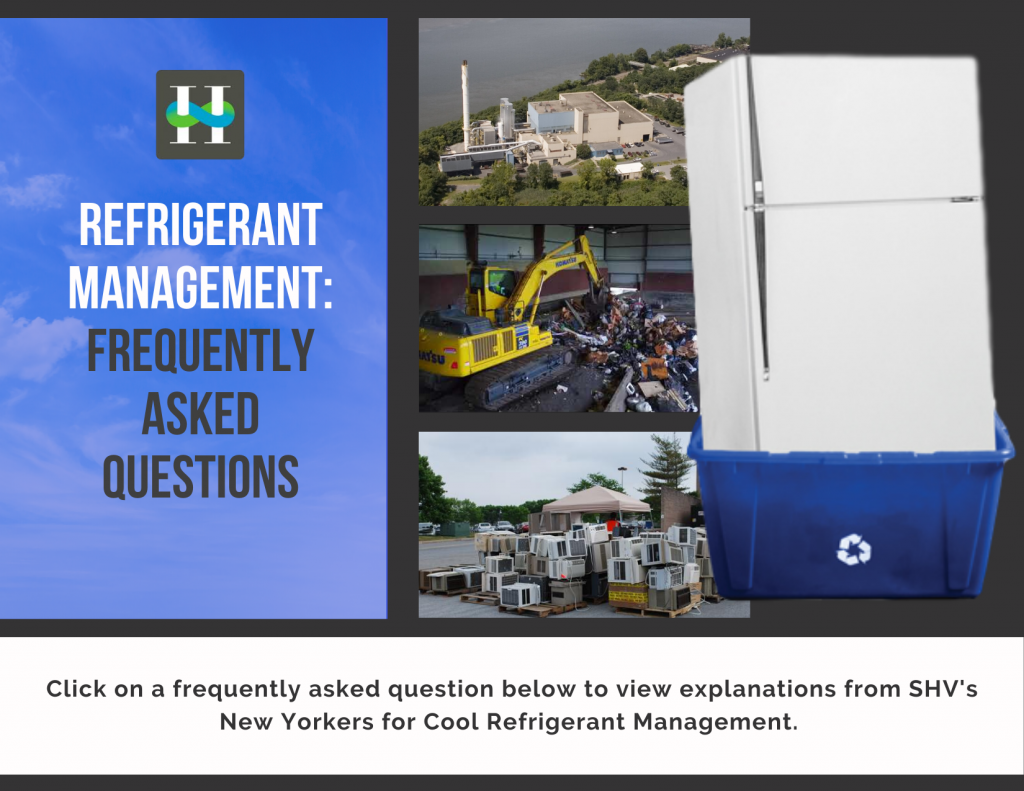 Why is refrigerant management such a big deal?

Drawdown.org, described as the most comprehensive list of climate solutions, ranks refrigerant management as the #1 solution for addressing the climate crisis. Drawdown is a project started in 2014, with the goal of outlining substantive solutions to reverse the climate crisis. The term “drawdown” is defined as “the point in time in which greenhouse gases peak and begin to decline on a year-to-year basis” (Hawken, 2017, introduction, p. X). Because refrigerants are extremely potent greenhouse gases, effectively managing refrigerants could reduce global warming by 1.0 degree Fahrenheit by the end of this century (whether or not civilization lasts that long). The goal of this FAQ page is to explain the roles refrigerants play in modern life, how they escape to the atmosphere, and the steps needed to mitigate their contribution to greenhouse gases.

Why should someone get involved with this issue?

According to Drawdown.org, the cost of implementing refrigerant management is a little over $900 billion (with a b). Unlike investments in solar panels or wind turbines, which pay for themselves and then some, the “only” benefit we get from fully implementing refrigerant management practices is a reduction in global warming of 1 degree Fahrenheit over the next 80 years. Because this is a little known subject and there are no built-in financial incentives for this work, there is a lot of grass roots education to be done with the aim of ultimately growing strong state, national and international policies. If you believe reducing global warming by 1 degree Fahrenheit is important, we can use your help on this issue.

Didn’t I hear the ozone layer is getting better? Hasn’t the problem with “Freon” and other refrigerants been solved?

Historically, refrigerants have contributed to two environmental problems. The first one, atmospheric ozone depletion (sometimes referred to as the “hole in the ozone”), was addressed by the Montreal Protocol and the world has made great progress on that. In the 1970s and 80s, scientists discovered the ozone layer was getting depleted, and found that refrigerants were responsible. They later were able to assess Ozone Depletion Potential (ODP), and the goal of the Montreal Protocol was to transition the world away from refrigerants with the highest ODPs (a class of refrigerants chlorofluorocarbons or CFCs); CFCs were transitionally replaced with hydrochlorofluorocarbons or HCFCs, which had much lower ODPs. The final transition (which is still under way) is from HCFCs to hydrofluorocarbons or HFCs.

The issue with ODPs has thus been addressed on a global basis, but the second environmental problem with refrigerants is they are very potent greenhouse gases.

How potent are refrigerants as greenhouse gases?

Scientists assess refrigerants and other gases, like methane, for Global Warming Potential (GWP). The GWP of a gas is measured relative to Carbon Dioxide, which has a GWP of 1. GWPs are established for different time periods, usually 100 years (which is the time period for the GWP numbers cited below). For example, the common refrigerant R410A has a GWP of 2088, which means one pound of R410 has the same global warming effect of  2088 pounds of CO2.

Here’s a list of some other common refrigerants and their GWPs:

A typical refrigerator holds 5 ounces of R134A, an HFC as described above. That little bit of R134A would  have the same carbon footprint as 23 gallons of gasoline, enough to drive a Prius from Orange County, NY to Florida. (That’s Tampa, Florida, not the Village of Florida!)

Please keep in mind, when refrigerants are in well-sealed machinery, they are fine — it’s only when refrigerant coils get ruptured that they leak. So, when an appliance with refrigerants stops working, the best practice is to take it for proper recycling as soon as convenient. Please also keep in mind that appliances are just the tip of the iceberg when it comes to refrigerants. Other applications use vastly greater quantities of refrigerant and also need attention.

Check out this video, which explains the science behind how refrigerants behave when released in the atmosphere.

Which types of refrigerants have low Global Warming Potential?

According to the U.S. Department of Energy, the ideal future refrigerant would include the following characteristics: non-toxic, non-flammable, zero ODP, zero GWP, acceptable operating pressures, and acceptable volumetric capacity for specific applications. (This last phrase means there may be some refrigerants that are acceptable in situations where only a minor amount of refrigerant is needed, but if used where vast amounts of refrigerants are required, they would be inappropriate.)

Via the Kigali Amendment to the Montreal Protocol, the ultimate goal is to replace the current HFCs with low-GWP alternatives. There are two broad classes of low GWP refrigerants: natural refrigerants and low-GWP F-gases, with each class having advantages and disadvantages.

Natural refrigerants, such as ammonia, carbon dioxide, propane, isobutane, and propylene, “do not form persistent wastes in the atmosphere, water, or biosphere” (Green Cooling Initiative). Additionally, naturally-occuring refrigerants are inexpensive, due to their wide-scale production and popularity of use in other industries. These all have extremely low GWPs, but the downside is they often are flammable, and they tend to require much higher operating pressures and more energy to work. In 2011, the EPA passed a rule allowing isobutane and propane to be used in residential refrigerators and freezers. Note that the mild- to high-flammability levels of these natural refrigerants has caused the HVAC&R industry to be reluctant to fully transition to these options, particularly in systems larger than appliances, where pipes holding refrigerants traditionally have been braised with a torch. Despite the affordability and safe disposal of these natural substances, the safety concerns with their high flammability causes some portions of the refrigerants industry in the United States to prefer low-GWP HFCs.

There seems to be a tension between backers of the two kinds of refrigerants. The natural refrigerant backers say the issues with flammability and high pressure requirements can all be worked out. Defenders of the low-GWP HFCs insist the natural refrigerants are unsafe (and the refrigerant industry would profit more from keeping industrially produced refrigerants in the picture). When you are reading about this issue, be sure to understand which camp the author resides in.

Here’s an excellent article from the EPA that describes the challenges of developing new refrigerants.

What are the laws about refrigerants in the US?

In the United States, after the Senate adopted the Montreal Protocol, the Clean Air Act was amended in the 1980s to give the Environmental Protection Agency regulatory authority over refrigerants. There have been different rules for different refrigerants for different uses over the last three decades, and the EPA has the role of coordinating U.S. laws and regulations with international standards and agreements. Here’s a summary of Section 608 of the Clean Air Act, the section regarding refrigerants.

What is the Kigali Amendment to the Montreal Protocol and what is the status of implementing it?

The Montreal Protocol was the fantastic and successful international agreement to phase out refrigerants that were creating a hole in the ozone (known as Ozone Depleting Substances or “ODSs”). Over time it became clear that the ODS Substitutes tended to have such high GWPs that they were making a significant contribution to the climate crisis. Thus, in 2015 the Kigali Amendment was signed with the aim of phasing out refrigerants with high GWPs.

Despite backing from environmentalists, leaders of the refrigerants industry, and Senators from both parties, the United States has not signed on to the Kigali Amendment.

What are the laws about refrigerants in New York?

Currently, the US Senate has not ratified the Kigali Amendment to the Montreal Protocol. Even so, as of 2018, Governor Cuomo has joined forces with California to uphold sections of EPA’s SNAP by reducing greenhouse gas emissions by 2030. On the subject of refrigerants, Cuomo has stated, “We are taking action to begin the phase out of the use of hydrofluorocarbons, and I encourage other states to join with New York and California to combat dangerous HFCs” (The Office of Governor Andrew M. Cuomo). Note that these states will ultimately be able to access the state of the art refrigerants and HVAC/R equipment that are under development in the European Union and other nations following the Kigali Amendment.

Can you describe the process of how a refrigerant is phased out?

By international agreement, R22  will no longer be produced after the year 2020. But more than 10 years before that, the EPA had already mandated that no new air conditioning systems using R22 could be manufactured or installed after 2010.  Now the only way to replace the refrigerant in one of those systems will be to buy recycled R22. This means R22 will get expensive quickly and many system owners will likely decide to replace their systems.

This page on the Federal Register has an in-depth history of the phase out of classes of refrigerants. In general, the phasedowns of refrigerants are quite gradual. An important reason for this is the equipment that uses refrigerants in the largest applications require large capital expenditures and they are supposed to work for decades. When improved refrigerants are invented and become easily accessible, in most cases they are incompatible with earlier systems. So, a planned phasedown needs to first make it clear that a refrigerant will be taken off the market so that equipment manufacturers will stop producing equipment at least 10 years before the refrigerant is fully phased out. In short, it’s a long-term process.

The #1 action for global climate impact is to stop leaks of refrigerants in the operating and recycling of appliances: refrigerators, air conditioners, heat pumps and some hot water heaters, chillers and industrial processes. In homes and businesses, these technologies make people comfortable, and in some cases (such as data centers), they are critical to business operations. 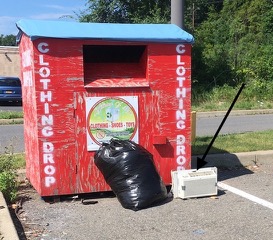 An estimated 90% of refrigerant leakage actually takes place at the point of disposal or recycling of appliances, an area where our research points to several systems failures. For example, you can get a rebate from your electric utility for recycling a working refrigerator, but not a broken one. It usually costs you money to take that fridge or air conditioner to a recycling center – where they may or may not know how to dispose of the refrigerants properly. While the biggest challenges of refrigerant management are in hotter climates and denser population centers, we all need to step up and learn how to reduce this impact.

With New Paltz Recycling and Re-Use Center, we have designed a pilot program to educate a community and collect up to 1,000 old refrigerators and air conditioners free of charge. We hope to make this available to communities everywhere.

Educate your networks with this handout: 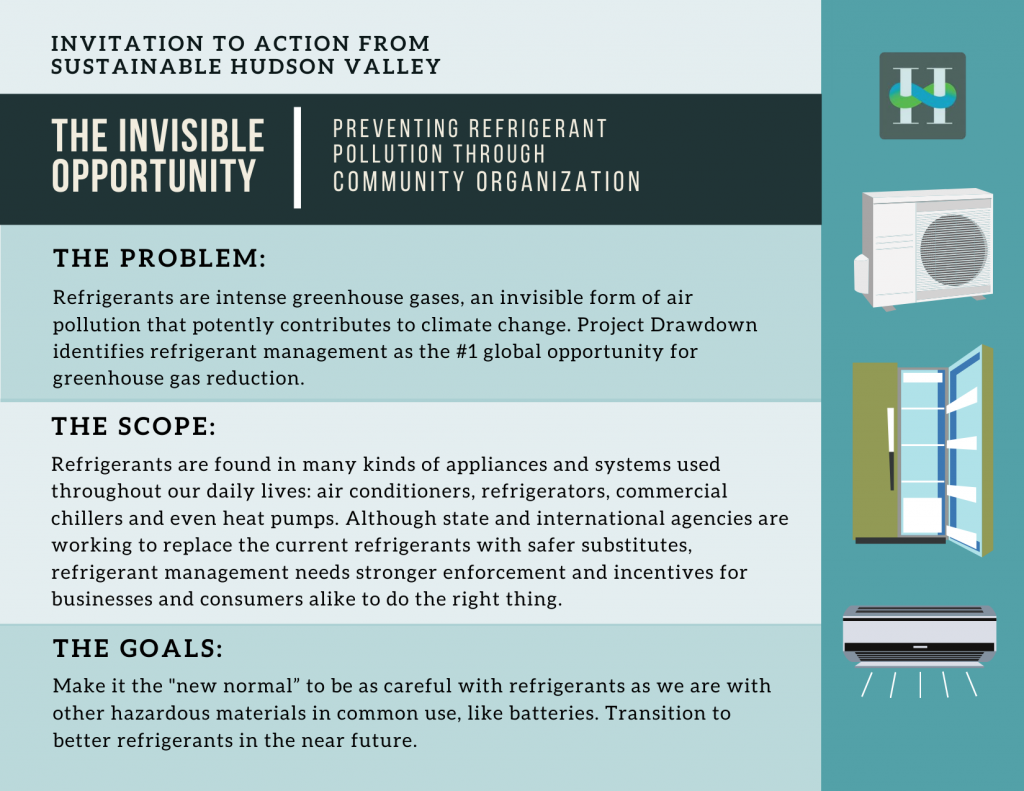 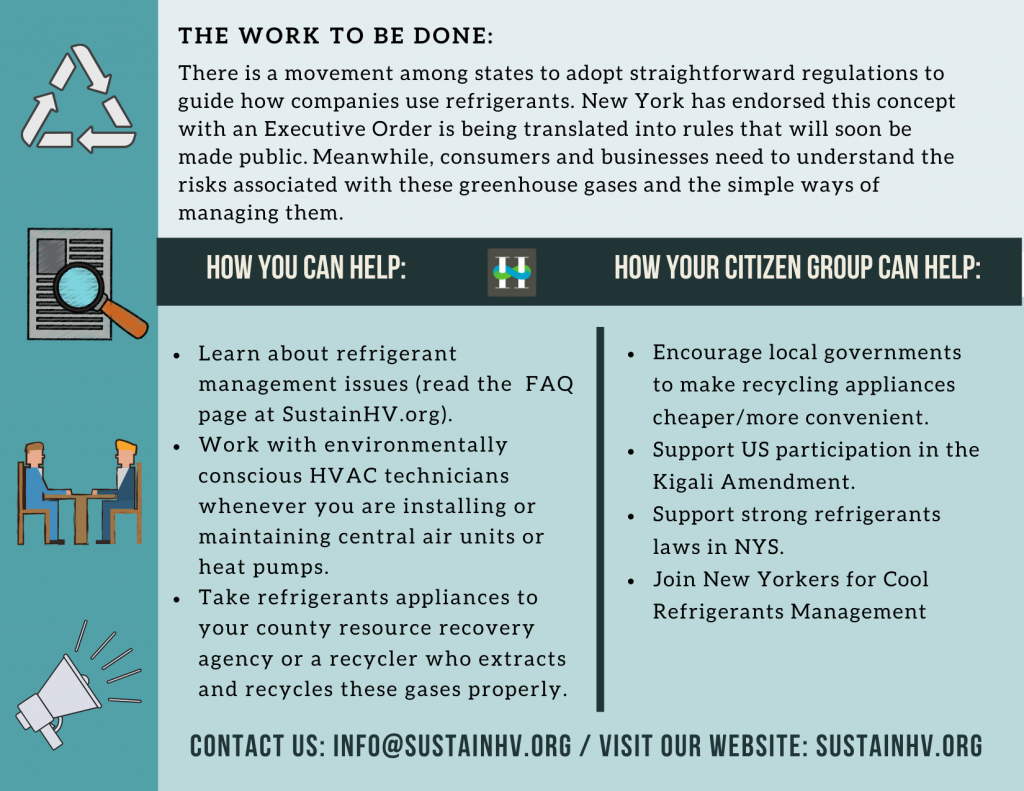