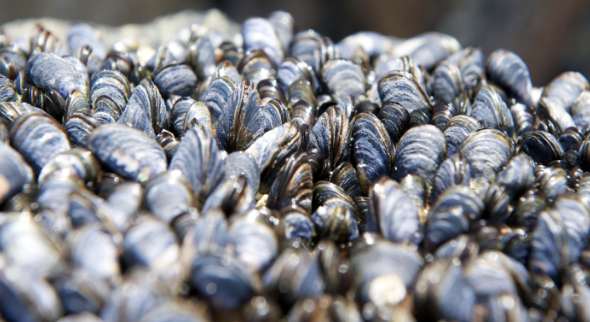 Zebra Mussels in the Hudson Valley

The Zebra Mussel is a nickel-sized, invasive mollusk native to Western Asia that is well-known for the zig zag stripes on the shell. Brought to the Great Lakes from Europe when ballast water was released from transoceanic vessels in 1991, they spread rapidly to the Hudson River, reaching an estimated peak of 57 billion. Researchers have pointed to factors such as the stronger byssal threads (sticky threads extending outward from an external organ) of the zebra mussel compared to other mollusks that allow them to better able to attach themselves to hard surfaces in order to reproduce and their ability to rapidly disperse larvae downstream, enabling them to spread rapidly compared to other mollusks as causes behind the success of their invasion. The arrival of zebra mussels into the Hudson River was nothing short of a total turnover of the native ecosystem- for example the population of pearly mussels, which feed primarily on phytoplankton, dropped by one billion to near extinction shortly following the arrival of the zebra mussel. Phytoplankton form the base of the “marine food web” in freshwater ecological systems as zooplankton-tiny animals near the surface of the water such as crustaceans, krill, or molluscs-depend on them for food. Zooplankton is the primary food source for many native fish and animal species in the Hudson, such as herring and shad which rapidly declined following the influx of zebra mussels. However, other open-water species like sunfish have prospered as less phytoplankton improved water clarity, allowing more sunlight to reach sea plants like seagrass that serve as food sources for these fish species.

According to invasive ecological studies, the efficiency and exponential growth of zebra mussels has resulted in complete filtration of the Hudson every 2 to 4 days, which had caused about 80% of the Hudson’s phytoplankton to be eliminated. In comparison, native pearly mussels typically filter all fresh water in the Hudson once every 2 to 3 months. Although the long-term consequences of zebra mussels on the food web of the Hudson is still being conducted, recent studies have found that native pearly mussels, along with other freshwater crustaceans, invertebrates, and worm species have made a significant comeback according to studies completed in 2007. These findings caused great excitement as in the years immediately following the arrival of the zebra mussel many of these native species were measured as being only at 1% of their original levels. Alongside the restoration of the Hudson’s native ecosystem, the population of zebra mussels has been steadily declining. Specifically, in 2011 researchers found that the annual survival rate of zebra mussels fell by 99% compared to their original survival rate in the early 90s and the rate at which they had filtered freshwater dropped by 82%. Although a specific reason for the zebra mussel decline is unknown, some scientists postulate that this is due to a combination of aquatic species that feed on zebra mussels such as sturgeon, blue crabs, and ducks. Additionally, the average age of zebra mussels in the Hudson has halved from 7 years to 2 years, signifying that the tremendous influence of the zebra mussel on the ecosystem of the Hudson is lessening for the first time, 20 years after their first invasion. The decline of the zebra mussel has also caused less clogging of the water intake and delivery systems for drinking water, irrigation,and hydro-power around the Hudson Valley. To catch a glimpse of the zebra mussels, all one must do is walk along the shore of the Hudson River in the nearby towns of Kingston, Rhinecliff, and Catskill to name a few.

How Can You Help Reduce the Colonization of the Hudson by Zebra Mussels?

Experts recommend that we can take action to reduce the growth of the zebra mussel population by inspecting boats, trailers, and other recreational equipment that have been in contact with water. Additionally, they recommend removing all mud, plants, and aquatic life from equipment used in the water, draining all bilge water, live wells, bait buckets, and all other water from boats, engine and equipment, washing all parts of equipment that have been in contact with water, and drying boats and trailers in the sun for five days before launching them into another body of water. Finally, any efforts made to remove dams that no longer serve a purpose around the Hudson could help native fish species that have declined as a result of zebra mussels come back to the Hudson River.

A Hudson Valley Native, Clara Griffin (She/Her) grew up in New Paltz, NY near the Walkill Rail Trail, where she grew up fishing, hiking, and stargazing with her family which fostered an early sense of appreciation for the beauty of nature. Clara regularly stays up to date on local environmental issues and organizations in the Hudson Valley. Today, Clara is volunteering for Sustainable Hudson Valley by writing blog posts. 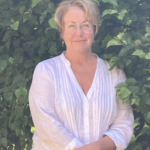